Graphic novel: what if the British had never left India?

Par Philippe
Publié le 9 juillet 2015
dans News Inde
Graphic novel: what if the British had never left India?2015-07-092015-07-09http://www.perspectives-asiennes.org/wp-content/uploads/2017/08/perspectives_asiennes.jpgPerspectives Asienneshttp://www.perspectives-asiennes.org/wp-content/uploads/2017/08/perspectives_asiennes.jpg200px200px
0
0
An alternate steampunk reality where England rules most of the world, fueled by Aqua Vitae.
Arjun Raj Gaind
Empire of Blood began with a simple question: What would India be like today if the British Empire had never ended? As the question is answered, what emerges is a surreal satire of the class system in the country.

For, in many ways, the hegemonies that were so visibly prevalent at the apogee of the Raj still exist in contemporary India. One set of overlords has merely been swapped for another.

Now, the oligarchs have become the new burra sahibs, while most of the country’s populace remains an underclass, blundering on in abject poverty.  Brave New India turns out to have a hollow vision, utterly effete.

This is a Bildungsroman set in an alternate steampunk reality where England rules most of the world, fuelled by Aqua Vitae, a mystical elixir that makes the Army nearly invincible. Technology has stopped with the Edwardian Age, and Indian society is a rigidly stratified dystopia, where the English live in luxury beneath towering glass domes while Indians suffer in squalid slum townships.  Amidst this world of inexorable divides, Tom Lawrence lives a comfortable, sheltered life, replete with all the privileges that his bloodline assures him. However, a growing friendship with his housekeeper’s daughter, Leela, causes him to begin to question the fundamentals of his beliefs, propelling him towards a cataclysmic denouement that will shake the very foundations of the British Empire. 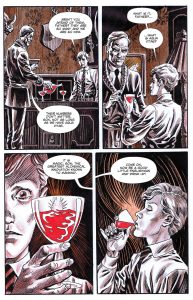