The first time Amin Sheikh ran away from his home in the Mumbai suburb of Malad in 1985, he was five. He had broken tea glasses at the shop in which he worked and was afraid to face the inevitable beating that would follow. He spent the next three years living on the streets of Mumbai, intermittently returning home and running away again when his stepfather’s abuse became too severe.

Then in 1988, a nun at Sneha Sadan, a home for street children, found him, his sister and their friend on Dadar station. She convinced them to come with her. That day, Sheikh says, changed his life.

Now 36, Sheikh has finally achieved one of his grand dreams: to open a café in Mumbai. On Independence Day, the doors of Bombay to Barcelona Library Café, in Marol near Mumbai’s international airport, will open to the public.

The day before, Sheikh held a soft launch for family and friends. Father Placido Fonseca, a steady mentor of his at Sneha Sadan, and Neela D’Souza, a friend, cut the ribbons. A buoyant Sheikh, all smiles, tended to visitors, greeting them and ensuring they had all dipped into the batata vadas, mushroom canapes, quiches, brownies and cakes arranged at the serving counter before they left.

“This restaurant did not fall down from the sky,” Sheikh said in his inaugural speech. “All of you made it happen. I am because of you.”

Bombay Mumbai: Life is Life: I Am Because of You is also the title of Sheikh’s autobiography, published in 2012, as a way to raise funds for the café. In sparse yet moving words, Sheikh describes the hardships he faced as a child and young adult and how he finally overcame them to open his own travel agency – Sneha Travels, named after Sneha Sadan. He ends the book with his dream to open a restaurant in Mumbai.

Sheikh intends to continue running his travel business even as he runs the café.

“The café is my dream but the travel agency is my life,” Sheikh said. “I will not give that up. Because of that I have met so many people and gone to so many places.” 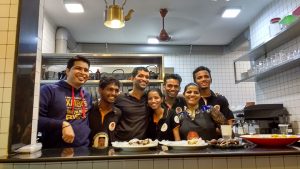 He has sold 12,000 copies of the book so far, and not just in English. Readers of the books have been so moved as to translate it for him. A Spanish customer of his travel service in Mumbai met Sheikh in Barcelona while he was making a presentation there on his book. She offered to translate it into Spanish and Catalan. Another man from Vasai asked if he could translate it into Marathi. Some bought 10 copies at a time, others more. One woman called him one day and ordered 600 copies, saying she would distribute them.

News of the book spread as far as to Figueres, a town in Catalonia, Spain, where Maria Antonia Perez, a retired public official, found it in a library in April while studying English.

“A teacher told us to do an oral task on an English book and I saw an orange one that said Mumbai on it,” Antonia said. “I did not know anything about Mumbai but the cover looked interesting so I read it.”

Perez found the story so compelling, she decided to buy the Catalan translation. When she wrote to the bookseller requesting a copy in Catalan, Amin replied directly, asking her to write to him in English. That set off an energetic correspondence between the two, who spoke daily over Whatsapp.

“When Amin said that he would be opening a restaurant very soon, I told Carlos we had to come and help him,” Perez said. “So we decided to spend two of our annual three week holiday here in India for him.”

Perez’s husband Carlos had run a café for 25 years, with Perez helping him beyond her own work hours. With their decades of experience, they felt they would be best placed to guide Sheikh past pitfalls they had encountered in their own careers.

The café itself was inspired by Sheikh’s visits to Barcelona, Spain. These were sponsored on his request by another mentor Eustace Fernandes. Fernandes, a creative director in an advertising company, took Sheikh into his house when he was 18 to provide a halfway home as he transitioned into full-time employment beyond Sneha Sadan. Sheikh did various odd jobs for him and grew so close to Fernandes that he referred to Sheikh as his son.

Sheikh does not intend to run the café as an uptight place where customers are harried into leaving early if they have finished eating. He wants to keep the space open and welcoming to all – especially to homeless children, who will never be turned away.

Those working with Sheikh in the café are mostly people who have lived on the streets at some point or another, who Sheikh knows through Sneha Sadan or other NGOs. One of them is his sister Sabiya, another is his niece.

Sheikh refers to his co-workers as his children.

“They are not employees,” he said. “They might not be educated, but they have different talents. Anil has a passion for cuisine and look at him, he is a street boy who is now building his own identity. I want them all to have their identities.”

Anil Kurup, the baker Sheikh referred to, began working with Sheikh just a few days ago. His contribution to the welcoming feast was delicate ajwain biscuits. Just 22, he has already worked as an apprentice at the Taj Mahal Hotel. He left the job because the hours were too long. He has since worked in other hotels.

“Even when I was unemployed, Amin bhai kept calling me and telling me to apply for jobs,” Kurup said. “I would say, yes, I have applied for a job, but actually I would be sitting at home. Then when I got work in the Chinese section, he said I should apply for bakery because that was what I liked and finally I listened to him and applied. Now I am using what I learned at the Taj here.”

Sheikh said: “This is what I want my children to learn. Even though someone has not respected you, you can still take this space for yourself. You do not need to be big to change someone’s life. And if my street boys and girls and can do this, anyone can.”